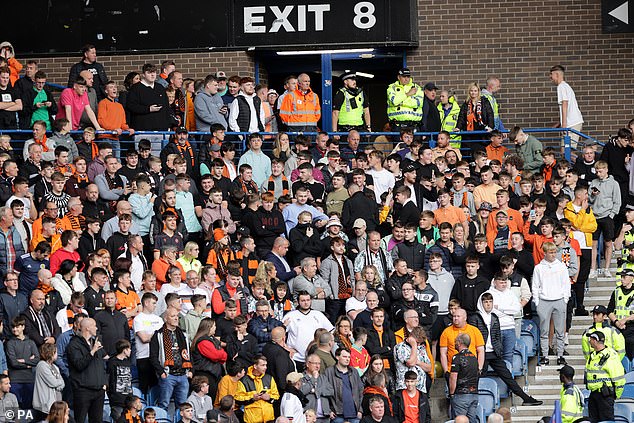 Dundee United fans have sparked outrage after sections of their supporters sang a vile chant about the death of Queen Elizabeth II during the minute’s silence before their Scottish Premiership match against Rangers at Ibrox.

As the vast majority of the stadium impeccably observed the tribute to Her Majesty, chants of ‘Lizzie’s in a box’ and jeers were audible from the away end.

Rangers fans, who had turned Ibrox into a Union Jack flag before their Champions League game with Napoli on Wednesday in a show of affection for the Queen, responded with loud boos before they broke out into a rendition of the national anthem.

In a statement, the club said: ‘Dundee United are aware of the actions of a small section of the crowd who chose to not respect the minute’s silence before this afternoon’s match at Ibrox.

‘As a club, ahead of the game we reached out to advise our supporters of the pre-match arrangements with the expectation that the minute silence would be observed.’

There was a mixed reaction to their interruption of the silence on social media, with some blasting their fans and others – some of whom appeared to support Celtic – agreeing with their opposition to the tribute.

The SPFL have told clubs this week that they ‘may wish’ to hold a period of silence ‘and/or play the National Anthem’ ahead of kick-off as domestic football resumed following the Queen’s death at the age of 96 last Thursday.

Rangers confirmed on Friday that they would honour the late Queen Elizabeth, while the club put a full-page picture of Her Majesty on the front page of their match programme for the Dundee United clash. 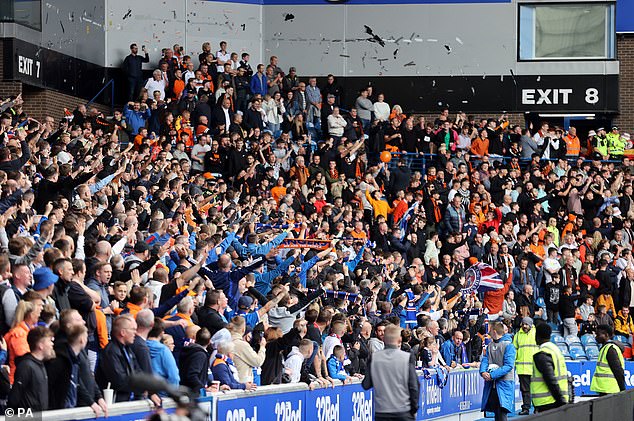 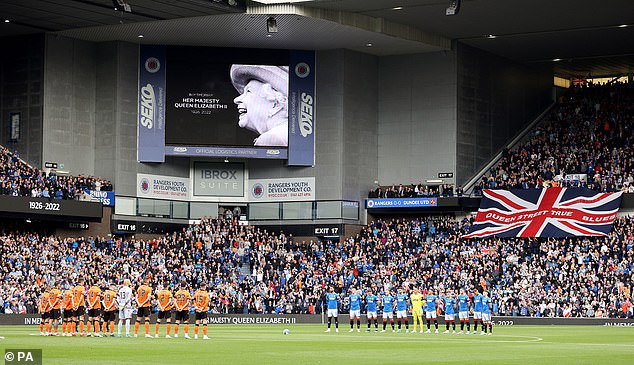 Dundee United are the latest Scottish club to publicly display an anti-monarchy sentiment after Celtic fans unveiled banners prior to their Champions League game in Poland against Shakhtar Donetsk.

Celtic have been charged by UEFA after supporters at the match against Shakhtar Donetsk in Poland revealed banners including one which read ‘f*** the crown’.

Sportsmail on Friday revealed Sky Sports’ production staff have been instructed to turn down sound levels or even switch off individual microphones during their live coverage of Celtic’s Scottish Premiership trip to St Mirren on Sunday if away fans sing offensive chants about the Queen.

Celtic fans held up two banners before their 1-1 draw with Shakhtar, with the other reading ‘Sorry for your loss Michael Fagan’ – a reference to an intruder who found his way into the late Queen’s bedroom at Buckingham Palace 40 years ago.

The anti-royal sentiments from Celtic have prompted St Mirren to ditch plans for a moment of silence before the game, with the club instead calling for ‘respect’ for a minute’s applause amid fears of mass booing from visiting fans.

Celtic have yet to publicly comment on the banners unfurled ahead of the Shakhtar match but manager Ange Postecoglou has urged the club’s supporters to respect the planned minute’s applause before tomorrow’s match, which will take place on the eve of the Queen’s state funeral on Monday.

‘I have the same message to our fans that we always have,’ said Postecoglou. ‘As I said before the game (against Shakhtar), we will abide by the protocols. We wore black armbands on Wednesday night. 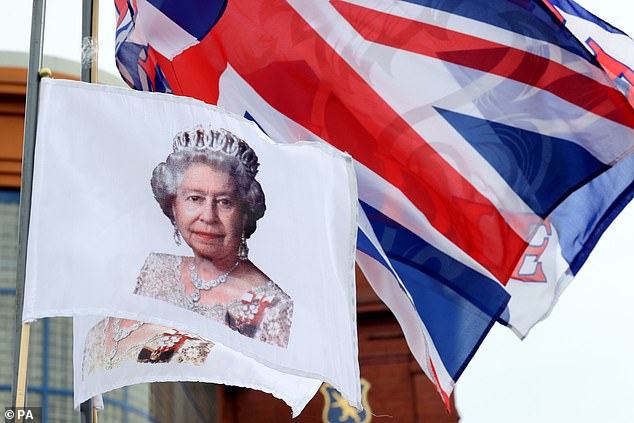 ‘I think there’s a minute’s applause, we will abide by whatever obligations and responsibilities we have as a football club. We will do that in a respectful manner. We want our supporters to do the same.’

Thousands of Rangers fans arrived armed with flags in tribute to the Queen on Wednesday, while Union Jack flags adorned the outskirts of the stadium ahead of Rangers’ Champions League homecoming.

Flags and banners, such as those depicting images of Her Majesty, were again seen outside Ibrox on Saturday in tribute to the Queen, which had been expected given vast swathes of the Rangers fanbase are known to have pro-royal and unionist views.

Rangers fans defied a UEFA ban on playing the national anthem ahead of the Napoli game but will not face disciplinary proceedings from European football’s governing body.

The Scottish club – along with Manchester City and Chelsea – had requested to play God Save the King ahead of their Champions League fixture with the Serie ‘A’ club.