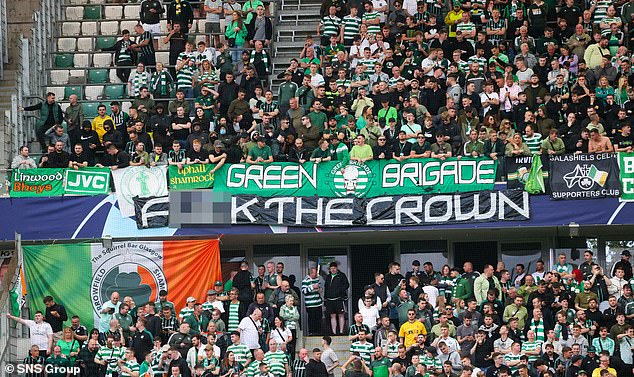 Celtic fans mock the Queen’s death with ‘F*** the crown’ and ‘Sorry for your loss Michael Fagan’ banners at Champions League clash in Poland, with minute’s silence in Her Majesty’s honour ditched before draw with Ukrainians Shakhtar Donetsk

Celtic fans unveiled an offensive banner that read ‘f*** the crown’ during their Champions League clash with Shakhtar Donetsk.

BT Sport were forced to apologise after honing in on an offensive banner concerning the Queen’s deathÂ on Wednesday night.

All UK teams playing home or away were permitted to hold a one-minute silence as a mark of respect for the Queen, who died last week.

Following a pre-match meeting between Celtic, Shakhtar and UEFA, however, it was decided that there would be no silence before kick off.Â

Players from both teams did wear black armbands in Her Majesty’s memory.

However,Â the sentiment clearly wasn’t shared by an element of the travelling support.

Just before kick off a banner was unveiled that read: ‘f*** the crown.’

As the Champions League anthem was being played another banner was unfurled that also mocked the loss of the Queen. It read: ‘Sorry for your loss Michael Fagan.’

Fagan famously managed to scale the Buckingham Palace walls before creeping into Her Majestyâ€™s bedroom while she slept in 1982. 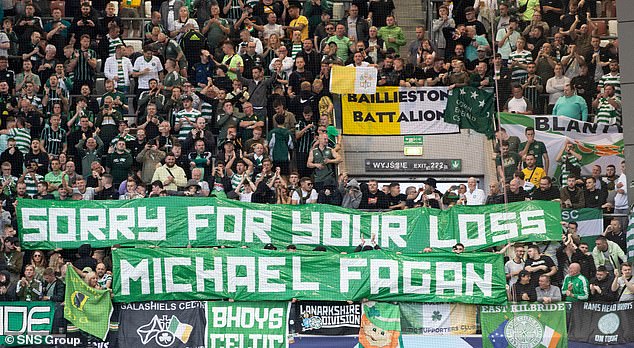 The then painter and decorator, who has schizophrenia, spent around 10 minutes talking to the monarch about his family.Â

The late monarch thought Fagan was just a drunk member of staff, who was eventually tackled by a duty footman.

The game is taking place in Warsaw due to the ongoing conflict in Ukraine at the hands of Russia.Â

Thousands of supporters trekked to Poland in support of Celtic in their second Champions League match of the season.Â