‘I’m so passionate about trying to get people into the sport’: Unsung hero Lily Rowntree has a plan – get people into hockey just in time for sport to return as the pandemic eases

By Lily Rowntree For The Daily Mail

I have always played hockey — it’s good for all ages, shapes and sizes and it’s one of the more gender-equal sports.

My husband Paul and I met playing club hockey in London and when we moved to York it was a no-brainer to join the club.

I was actually pregnant with our first child but as soon as I had Emily I joined the ladies fourth team. Then I had my second daughter and dipped into the 5s and 6s. I’ve worked my way up to the 1s gradually!

Paul plays, Emily is now in the Under 10s (which Paul and I coach) and Sophie, our littlest, is playing beginners.

There are loads of brilliant people — I’m just one of those that helps out. And I’m really lucky because I’m not working at the moment and I wanted to get into volunteering anyway. So when a friend said there was a vacancy for fixtures secretary I took it on.

I used to work in HR and I like being organised. I’ve expanded the role — possibly because I’m a bit of a control freak — so as well as organising fixtures, I also manage the pitches. Before, anybody was booking them and it was a bit of a nightmare. It is quite a lot of bookings — we have between 600 and 700 players — but I quite enjoy it.

Every Sunday evening I used to put aside a couple of hours, maybe with a glass of wine, and send out my emails.

But you’re constantly on call. I keep an anxious eye on my phone to see if anybody turns up at the wrong place. It’s probably more hours than I realise. 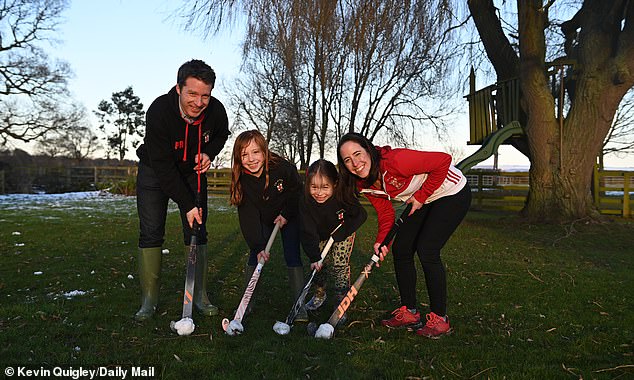 Rowntree and her family, husband Paul and daughters Emily and Sophie, all play hockey

I keep a keen eye on the weather and if it’s going to be below three degrees you’re looking at a potential frozen pitch.

At the beginning of the pandemic, you could see the seriousness of it all. And I don’t know whether it’s my HR side, but alarm bells were ringing. I thought, “We need to make sure that we do this properly”.

I took on the role of Covid officer but when it all started I was in Scotland on holiday. We had a car accident and all of a sudden I was hanging off every bit of battery on my phone and other people’s laptops, trying to get all the Covid stuff organised.

It was about developing really clear guidelines for our players.

We made sure there was hand sanitiser and the pitches had a one-way system. That sounds straightforward but when people are used to congregating it’s quite hard to snap them out of the routine.

Everybody had to sign a player-participation form and also a self-assessment every time they played. I checked over 600 people to make sure they filled in the right forms which was a bit of a nightmare.

It got tricky because one league could have different clubs in multiple ‘tiers’. We’d normally have 16 fixtures each weekend for seniors so you had to figure out: which games can we actually play? That was a big headache! 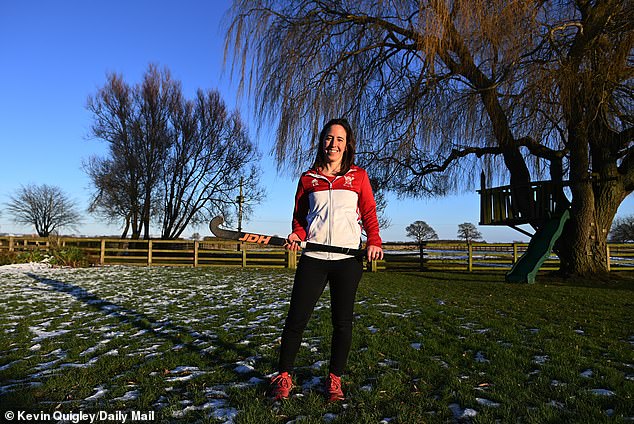 What has given me the most sleepless nights is knowing that people can become complacent. I was like the Covid police — making sure, without nagging, that people don’t forget.

It’s also been tricky celebrating goals, saying, “We can’t be hugging!” I’ve been a little bit of a party pooper.

But we didn’t have a single case where somebody caught Covid from another player through hockey.

Once this is over, I’ve got a plan. I’m passionate about trying to get people into the sport and during lockdown England Hockey are doing a lot of coaching courses online. I’m currently doing my level two.

Whether it ends up being a career, I’m not sure. I’ve got other hobbies — I’m chair of York Symphony Orchestra — but I’d like to do as much as possible to help both juniors and seniors access the sport.

HOT OR NOT: Louis Rees-Zammit has Wales moving again

‘We are not getting those runs’: Chris Silverwood puts England’s faltering...

'We have to address and accept we are not getting those...

UFC: Colby Covington claims Dustin Poirier was a ‘NOBODY’ before his...

West Brom ready to move for Derby captain Tom Lawrence if they...

Yamaha/Vinales MotoGP situation “a shame for the championship”

Khamzat Chimaev reveals fall-out with Khabib was sparked by comment that...

This website uses cookies to improve your experience while you navigate through the website. Out of these cookies, the cookies that are categorized as necessary are stored on your browser as they are essential for the working of basic functionalities of the website. We also use third-party cookies that help us analyze and understand how you use this website. These cookies will be stored in your browser only with your consent. You also have the option to opt-out of these cookies. But opting out of some of these cookies may have an effect on your browsing experience.
Necessary Always Enabled
Necessary cookies are absolutely essential for the website to function properly. This category only includes cookies that ensures basic functionalities and security features of the website. These cookies do not store any personal information.
Non-necessary
Any cookies that may not be particularly necessary for the website to function and is used specifically to collect user personal data via analytics, ads, other embedded contents are termed as non-necessary cookies. It is mandatory to procure user consent prior to running these cookies on your website.
SAVE & ACCEPT
MORE STORIES
Transfer News