By Chris Wheeler for the Daily Mail

Kyle Lafferty is back among the goals for Northern Ireland, but whether he will be back in the team against world champions Germany on Tuesday night is another matter altogether.

The Norwich City striker came off the bench in the 79th minute to score twice and set up another as Michael O’Neill’s side beat San Marino 4-0 in Group C at Windsor Park.

O’Neill admits it is difficult to put his talisman in the starting line-up when he has played just 28 minutes of Championship football under Alex Neil at Norwich so far this season. 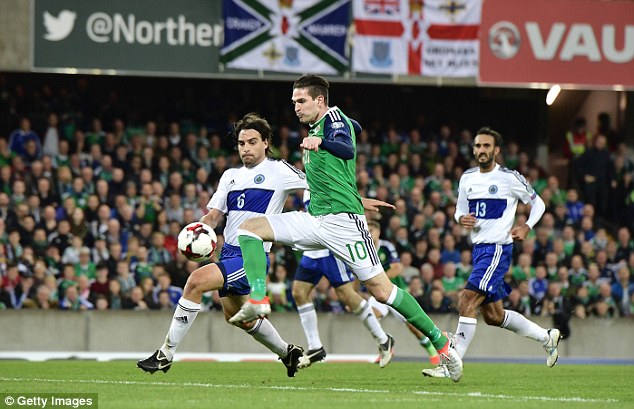 Lafferty, 29, is set to leave Carrow Road in the January transfer window, but may have to accept being an impact substitute for his country until then despite ending a five-game barren run by taking his tally to nine goals in his last 11 qualifiers.

Asked if this is the toughest period of his career, Lafferty said: ‘It probably is. I want to play as many games for Northern Ireland as I can. Not starting, I’m always going to be disappointed.

‘But if the manager says I’m not fit enough and I’m going to be better for the team playing 30 minutes and not starting, I have to respect that.

‘It’s not all about me. There are players playing club football and if I was in their shoes I’d be asking questions why I wasn’t starting.

‘I’m just trying to get as many minutes under my belt and hopefully in January I’ll be playing first team football and be fitter.

‘I know my international record to club football is completely different. In club football, I don’t really have a manager who has a lot of faith in me like Michael has, and I’m repaying Michael by getting goals and three points.’ 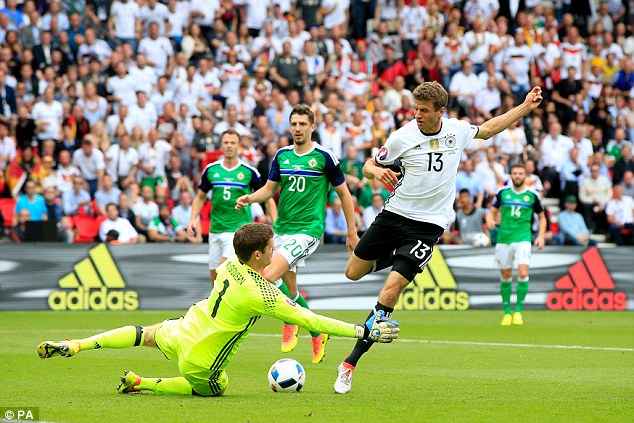 Northern Ireland face the Germans in Hannover nearly four months after losing 1-0 to Joachim Low’s side in Paris at Euro 2016.

Only a world-class performance from goalkeeper Michael McGovern saved his team from a much heavier defeat that day. It earned him a move from Hamilton Academical to Norwich where, unlike Lafferty, he is a regular starter.

McGovern said: ‘There was a bit of interest in England before the tournament but obviously after it, it really snowballed and offers rushed in.

‘I don’t talk about the Germany game in France that much, to be honest. I haven’t watched it back or anything.

‘I’d like to think I won’t be just as busy this time, but I will be prepared for every eventuality.’ 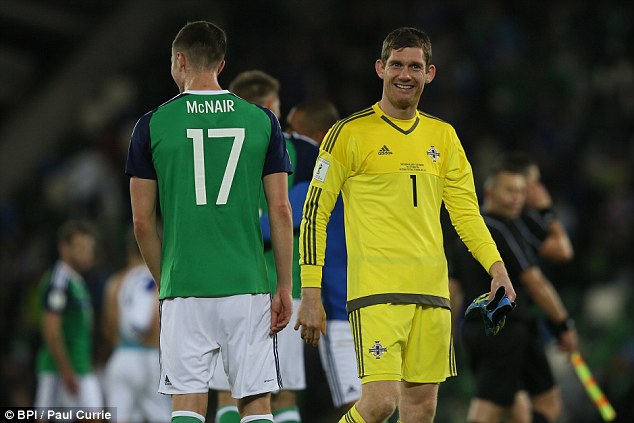 Euro 2020: England players celebrate on social media after sealing their...

'Wow what a night... Wembley was incredible!': Harry Kane leads the...

Arsenal, Tottenham, West Ham and Everton are all keen on Inter...

Kroos will retire at Real Madrid and admits he could hang...

Alexander Volkanovski Calls Brian Ortega Out For Actions On TUF

Kieran Tierney jokes Conor McGregor would ‘put the fear in everyone’...